Croatian-American muralist Maksimilijan “Maxo” Vanka used the walls of St. Nicholas Croatian Catholic Church as a canvas, forever making the Millvale space a place of both worship and artistic inspiration. The unusual location, while stunning, also makes it challenging to draw audiences in to appreciate the 25 works, which combine religious iconography with provocative imagery.

Now, the Society to Preserve the Millvale Murals of Maxo Vanka has set out to renew interest in the murals with new, inspired artwork, technology, and community outreach.

The Society will host Paint the Town Maxo, a party to raise funds supporting the conservation and education efforts around the murals. Taking place Thu., May 19, the event will include Vanka-themed activities, live entertainment, and more.


The event will also mark the debut of Gift to America 2.0: New Voices. New Walls., an exhibition of works reinforcing the murals’ themes of “justice, injustice, the immigrant experience, and motherhood,” says the society’s executive director, Anna Doering.

The annual affair returns after two years of being either online or canceled altogether due to the pandemic, with some changes.

“Typically every year when we do these programs or these events, we have a significant section of the program happening in the church, sitting down, everybody sort of shoulder to shoulder,” says Doering, adding that this year, guests will have to show proof of vaccination and most activities will happen outside on the church grounds.

Still, Doering says the Society wanted to keep the event “kind of light” and use it as a way to “reintroduce ourselves to current audiences and new audiences.”

“Over 2020, 2021, we actually did a fair amount of virtual programming like everybody else,” says Doering. “And we met a lot of new people who’ve never either been to the murals or haven’t come to one of our events before. So we wanted to take the opportunity to show people what we have been up to in the last few years, and put a focus on what we’re doing right now.”


Doering says that, while the Vanka murals are less of a “hidden treasure” than before, they are still unknown to people living in and outside of Pittsburgh. She admits that it took 10 years of living in the city before she was even introduced to the works.

To remedy this, the Society does a variety of community outreach, doing both group and private tours, and inviting school students and teachers to experience the murals. They also created an online, 360-degree virtual tour of the exhibit, which guests will be able to experience via VR headsets at the Paint the Town Maxo event.

“That’s something we did that we always wanted to do, was create a virtual tour, because we have so many people who can’t get to Pittsburgh,” says Doering. “And we wanted to find a way to give access to audiences who, for whatever reason, maybe wouldn’t come or couldn’t come to see [the murals] in the church.”

Doering says that expanding their reach also helps their group see the murals through new eyes.

“We really are just excited to be at the point where we’ve been talking for years about the universal nature of the murals,” says Doering. “I think we’ve always been able to demonstrate the timeless nature of the murals. Getting all of these new perspectives to the mural are helping us to sort of explore that universality, sort of how they relate to people. So we actually are really excited because we’re getting educated about how people are teaching, you know, about how to interpret the murals from a different perspective.”


Gift to America 2.0 adds to this by allowing local artists to put their own spins on the murals’ main themes. Curated by Corey Carrington of Deeper Than Grits Studios, and made possible by The Opportunity Fund and The Pittsburgh Foundation, the show will include works by #notwhite collective members Christiane Dolores and Maggie Negrete, street artist Max E. Gonzales, and artist Cue Perry. 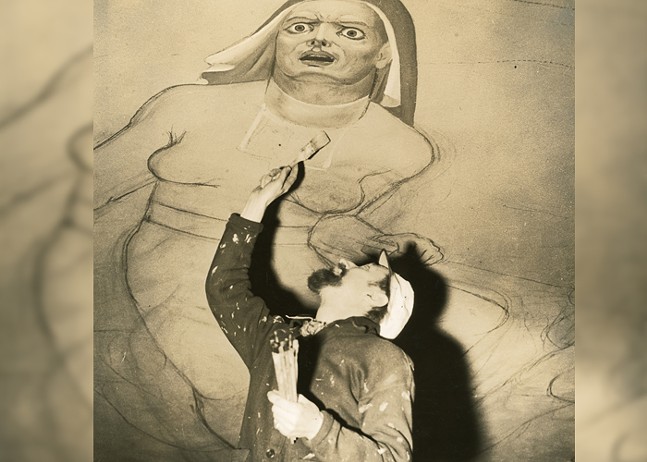 Photo: Courtesy of the Vanka family

Justin Dumas, the Society’s marketing and media manager, says the goal of the show “was to make original works that reflect on and thought about the themes in the murals.”

“And these works they produced are supposed to be for multi-generational audiences,” says Dumas. “And so it just really seemed appropriate with everything kind of going on health-wise, politically, globally, everyone kind of found, you know, their entry point, the relevant way for them to think about and respond to that.”

Gift to America 2.0 will also serve to showcase the Society’s commitment to its community engagement efforts by going up for public display in a Millvale storefront on North Avenue storefront this summer. The works will then travel to Duquense University later this year.

Beyond introducing new audiences to the murals, Paint the Town Maxo will also continue conservation efforts around the murals, which were originally created between 1937 and 1951, so they can be enjoyed by future generations. Right now, Doering says conservators are actively working on the St. Francis and St. Claire murals. They also plan on restoring the murals on the upper high walls and ceiling of the church, which Doering says would also require doing repairs to the church’s roof.

“You have to come and see them in a way to receive a dramatic sort of before and after images of the paintings,” says Doering. “But it’s really exciting to be here, and that’ll be going on really through the summer, conservators working on those. So we have our regular tours going on throughout the week, private and public tours, they can come and they can see the conservation in action.”

Tue May 17 , 2022
All over Anna’s will work, whilst they present these types of a range of situations, people today and destinations, she manages to craft a persistently warm, delicate and tranquil feel through her function. When conversing us through how she produces this kind of an atmosphere, Anna tells us that lights […]