BUFFALO, N.Y. – The original Giant Killers have returned. The 12th seeded University of Richmond men’s basketball team was the talk of the basketball world Thursday as the Spiders knocked off fifth-seeded Iowa 67-63 in the first round of the NCAA Tournament at KeyBank Arena. The Spiders will face fourth-seeded Providence Saturday at a time to be determined late Thursday evening.

The Spiders advance to the second round of the NCAA Tournament for the sixth time in program history and the first since 2011. With the win, Richmond improves to 4-0 all-time in the NCAA Tournament against No. 5 seeds, joining previous victories in 2011, 1988 and 1984. The victory improves the Spiders to 24-12 on the year, the fourth most wins in a single season.

Junior forward Tyler Burton (Uxbridge, Mass.) added 18 points and grabbed 11 rebounds, recording his 11th double-double of the year. He was 9-of-10 from the free throw line in the game, helping the Spiders hit 14-of-16 (87.5 percent) from the charity stripe. Burton became the 51st Spider to reach the 1,000-career point club on a pair of free throws in the second half.

Graduate forward Nathan Cayo (Montreal, Quebec) played a pivotal role in the game, scoring 15 points on 7-of-11 shooting from the field. Cayo scored 13 points in the second half, including five points in the final 1:24 of the game with two big field goals to keep the Spiders in the lead.

The Spider defense held Iowa (26-10) to its third-fewest points in a game this year and the fewest since January 19 (Rutgers). The Hawkeyes finished the game shooting just 36.4 percent (24-of-66) from the field.

The Spiders came out quickly as Burton and Gilyard combined for 12 of their first 14 points as Richmond held a 14-13 lead early. The Spiders continued to frustrate Iowa on offense, holding the Hawkeyes to just 30 percent (10-of-33) shooting from the field and only 1-of-13 (8%) from deep in the opening half. Burton sent the Spiders into the locker room holding a 29-28 lead, hitting three free throws in the final seconds of the half. He finished with 14 points in the first half while Gilyard added nine points.

Iowa had its first run of the game shortly after halftime, scoring 11-straight points in a span of 1:36, taking a 39-34 lead and forcing a Richmond timeout. The Hawkeyes got back-to-back 3-pointers from Patrick McCaffery to ignite the run, after being held to only one deep shot in the opening half.

The Spiders had an answer right back, responding with 11-straight points of their own and retaking the lead at 45-39. Cayo got the crowd going with a dunk on a fast break while Gilyard put the Spider fans into a frenzy with a 3-pointer that bounced all around the rim before falling in.

Iowa narrow the gap to one at 47-46 before the Spiders responded once again with seven-straight, capping again on a Gilyard 3-pointer for the 54-46 lead with 6:13 remaining. The Hawkeyes clawed back within one at 58-57 with 2:02 remaining before Cayo scored on a second chance basket after a big offensive rebound by Andre Gustavson (Helsinki, Finland) kept the possession alive.

The Spider defense stepped on the ensuing possession, getting a big block from Matt Grace (Hamilton, Ontario). Cayo again was up to the task, driving to the basket and converting an old-fashioned 3-pojnt play for the 63-57 lead. Iowa got four quick points but Gilyard iced the game going 4-of-4 from the free throw line in the final 15 seconds to secure the victory.

WomenFest will attribute visible art and are living songs

Tue Mar 29 , 2022
WomenFest will consist of things to do like learning yoga approaches. Melissa Begay and Tierra Candelaria reveal.Submitted image SOCORRO – Socorro is known for its scientific analysis and for the Bosque del Apache Wildlife Refuge and its excellent birding options. But the county also is dwelling to an incredible selection […] 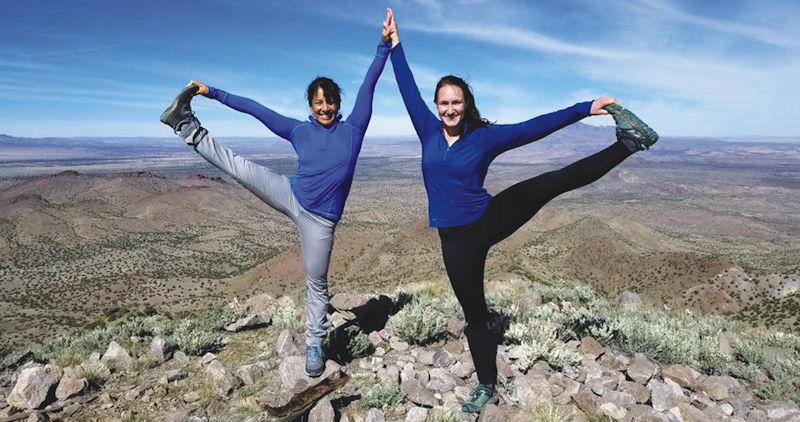