Movies are back in theaters and, if you feel comfortable enough, it might be worth checking them out with a bag of artificially buttered popcorn and a soda the size of your thigh. And if that isn’t for you just yet, make some popcorn and drink a thigh’s-worth of soda on your couch for your late-night movie binges. Although it’s still early in 2022, some early Oscar contenders and true crime capers have already captured the attention of millions.

We’ve compiled a list of options for you to pick and choose from, or you can watch ’em all. Now, without further ado, our picks for best movies of 2022 so far.

“Speaking of reboots, here now is Matt Reeves’ ‘The Batman,’ which clocks in at a hefty 170 minutes and stars Robert Pattinson as the Caped Crusader. If you’re a Batfan — and the Census Bureau tells me you very much are — you’re already waiting in line to see the movie, even though we have Fandango for that kinda s—t now. Perhaps you have questions about ‘The Batman’ or, more likely, you’re a deranged asshat who wants to yell at me for writing about the movie before you’ve even had the chance to see it. I respect your intentions either way, so let’s ditch this already lengthy intro and get down to business.” — Drew Magary, read more

“The documentary revolves around several European women who share the details of their relationships with Leviev, an Israeli man who claimed to be the son of a diamond mogul. They believed their relationships to be monogamous, but unbeknownst to them, Leviev was juggling multiple relationships at once. His glamorous lifestyle wasn’t necessarily a mirage, he did indeed jetset around Europe spending frivolously on expensive dinners and at bottle service nightclubs. He’d gain each woman’s trust with his generosity, then suddenly claim his business enemies were tracing his transactions and threatening his life. He needed to borrow just a few thousand dollars. Then a few thousand more.” — Dan Gentile, read more

“Mei is voiced by 16-year-old Fremont resident Rosalie Chiang, who, in a stroke of coincidence, once gave a presentation about red pandas to her fifth grade class (she notes that they are indeed related to raccoons). Chiang was just beginning her acting journey four years ago when she received an opportunity to try out for the role. ‘I didn’t think anything would come of it,’ Chiang said, speaking to SFGATE a few feet from the pandas at the SF Zoo.” — Dan Gentile, read more

“This is an impeccably made film, if a touch cold. The cinematography is predictably breathtaking, even if at times it feels like you’re watching the world’s most expensive music video. The acting is on point, especially now that [Joel] Coen finally listened to his critics and actually hired nonwhite actors to fill out the playbill (Corey Hawkins, playing Macduff, is excellent). The witches are spookier than your great-aunt’s house. And the violence is, true to Coen form, visceral enough to make you gasp.” — Drew Magary, read more

“The documentary shows adults shoving past one another in crowded gift shops, calling out the names of their desired Beanie Babies as the plastic pellet-filled toys catapult through the air. An eBay reseller who calls herself the Queenie Beanie sells her collection to a man for $20,000 — at least quadruple the original cost. Families besiege a local McDonald’s drive-thru, tossing out their uneaten Happy Meals in favor of the Teeny Beanies inside. A former FBI employee, still entrenched in credit card debt because of her Beanie Baby purchases from decades ago, sings a ‘Beanie Rap.'” — Amanda Bartlett, read more

“Nothing is quite as magnificent as middle-aged men in tighty whities getting shot out of cannons with angel wings on, and audiences seem to agree. Early returns indicate that it will be the No. 1 box office hit of 2022. The film’s teasers look tantalizingly familiar (exploding musical chairs, strapped into a seat and covered in honey while a bear sniffs around, getting bitten by a venomous snake while remaining silent in mime costumes), but it’s [Chris] Pontius, 47, who maintains he’s playing the hits while still trying to stretch his and his co-stars’ limits.” — Andrew Pridgen, read more

Keep updated on all the best streaming movies and TV shows by signing up for our weekly Remote Control newsletter.

Wed Mar 23 , 2022
Far more than 12,000 toes higher than sea level in western Bolivia, in the modest city of Oruro, each and every calendar year for generations has viewed a fight involving fantastic and evil. Dancers putting on elaborate, horned, technicolor masks conduct the Diablada, or “Dance of the Devils,” making an […] 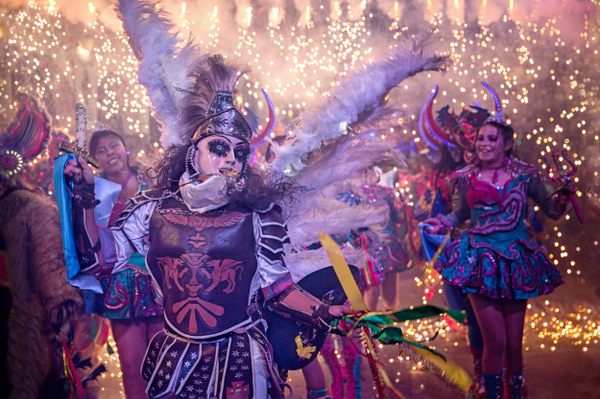